Upon Seeing People Who Do Not Fast in Ramadan

Sheikh Muhammad Ibn Shalih al ‘Uthaymeen was asked about someone who was fasting, then he ate and drank in the afternoon because he forgot (that he was fasting). Should he be warned or not? (Regarding the belief of some people that one who was fasting but forgot about it, should not be warned because he was given food and drink by Allah). 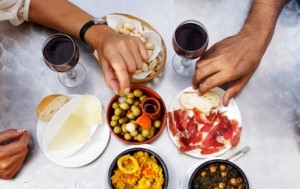 Whoever sees a fasting man or woman eat or drink during the day of Ramadan (because of forgetfulness), must warn him or her. It is based on the saying of the Messenger of Allah -peace and prayer of Allah be upon him-, when he forgot something in his prayer, “If I forgot, please remind me.” (Narrated by Bukhari in his compilation of valid hadith).

Someone who forgets, or mistakes, then his mistake is forgiven. Whereas someone who remembers and knows that the deed invalidates fasting, but doesn’t warn his brother, has committed a mistake. Because one who forgets is his brother, and he supposed to wish something for his brother as he wishes it for himself.

In this occasion I also would like to explain that the invalidator of fasting will not invalidate the fast in three conditions: If the doer forgets, or uninformed, or does it unintentionally.

If someone forget, then he eats and drinks, his fasting is still considered valid, based on the saying of the Messenger of Allah -peace and prayer of Allah be upon him-, “`Whoever forgets that he is fasting and eats or drinks, let him complete his fast, for Allah has fed him and given him drink.”’ (Narrated by Muslim in his compilation of valid hadith)

Likewise, the law of someone who unintentionally does something that might invalidate his fasting, such as gurgling water in his mouth to the point that it enters his throat; his fasting is still valid. The water that enters his throat doesn’t invalidate his fasting because he swallows it without intention. As someone who dreams of having sexual intercourse then he ejaculates. His fasting is still valid, because he is asleep and he ejaculates unintentionally.

Allah the Exalted decreed, which can be translated as, “Call your adopted sons after their true fathers; that is more equitable in the sight of Allah. But if you do not know their true fathers, then regard them as your brethren in faith and as allies. You will not be taken to task for your mistaken utterances, but you will be taken to task for what you say deliberately. Allah is Most Forgiving, Most Compassionate.” (Qs. Al Ahzab/The Combined Forces : 5).

When does the Fast Start?

What are the things Compulsory for the Fasting One?

Canceling the Voluntary Fast when Offered Foods and Drinks