Explanation of Hadith from Jabir regarding the Prophet’s Offering

Lessons from the hadith:

Among the lessons contained in this hadith are:

“Say: “Surely my Prayer, all my acts of worship,  and my living and my dying are only for Allah, the Lord of the whole Universe. (162) He has no associate. Thus have I been bidden, and I am the foremost of those who submit themselves (to Allah).” (163) (Chapter Al-An’aam/The Cattle:162-163)

Is it Compulsory to Offer Slaughtering

The scholars have different opinions regarding the ruling of slaughtering. Majority of the scholars, i.e., the schools of Imam Malik,Ash Shafi’i, Ahmad, etc, stated that it is suggested/voluntary to slaughter. The school of Ash Shafi’i stated that it is ephasized voluntary act (sunnah muakkadah, which is strongly suggested and forbidden  to abandon except for legitimate reason). Whereas the school of Imam Abu Hanifa stated that slaughtering is compulsory. It is narrated from Abu Huraira -may Allaah be pleased with him- from the Prophet -peace and prayer of Allaah be upon him-, that the Messenger of Allaah -peace and prayer of Allaah be upon him- said,

“Whoever has the ability (to offer slaughtering, -tr) but doesn’t, shall not go near our place of prayer.” [1]

The scholars held different opinions regarding the ruling of this hadith, as well as in the ruling of a hadith that is narrated by Mikhnaf Ibn Sulaim Al-Ghamidi -may Allaah be pleased with him- below:

“We performed ablution in ‘Arafa with the Prophet -peace and prayer of Allaah be upon him-. I heard he said, “O mankind! For every family in every year a slaughtering, as well as Al-’Atiirah. Do you know that is Al-’Atiirah? It is what so-called Ar-Rajabiyah [2].”’[3]

Sheikh Al-Albani classified this hadith as valid. Sheikh ‘Abdul-Muhsin Al-Abbad stated in his explanation regarding Sunan Abu Daud that it is a weak hadith. If both of these hadith are valid, or good, then it can be a very strong indication to say that the ruling of offering slaughtering is compulsory for every year, for anyone who is capability to perform it.

However, there are narrations from Abu Bakr, Umar Ibn Al-Khaththab and Abu Mas’ud Al-Anshari -may Allaah be pleased with – indicating that both of them deliberately abadoned slaughtering so that the muslims wouldn’t perceive it as compulsory.[4]

“If the first ten days (of Dzulhijjah) have arrived, and one of you desires to slaughter, he shouldn’t cut anything from his hair or his body.” [5]

The best choice in responding to such matter is by being cautious (waro’). Supposed that the opinion that say that it is compulsory is true, we’ll be saved from the sin of abandoning it. If it is untrue, then we’ve performed voluntary act and the teaching of Islam.

“Such is the fact. And whoso venerates the sanctity of all that have been ordained as symbols of Allah surely does so because it is part of the true piety of the hearts.” (Chapter Al Hajj/The Pilgrimage: 32)

What is the Definition of Ability by which A Person is Strongly Suggested to slaughter?

The scholars have different opinions regarding this matter. In the school of Imam Ash Shafi’i, a person is said to have ability if he has livinghood for himself and his family on the day of ied al adha and the days of tasyriq (i.e., 11,12,13 of Dzulhijjah) and Allaah knows best.

If all person who has financial ability is willing to offer slaughtering, by Allaah’s permission, the meat of the slaughtered animals will come in abundance, thus all muslims will be rejoiced during this festive day.

Is it allowed for the one offering slaughtering to bring his family altogether in terms of rewards?

Yes, it is allowed for him to bring them in in term of rewards, just like some of the Prophet’s companions did in the past. It is narrated from Abu Ayyub Al-Anshari -may Allaah be pleased with him- that he said,

“In the past, at the time of the Prophet -peace and prayer of Allaah be upon him-l there was a man who slaughtered a goat for himself and his family, and they ate it and fed others, thus many people competed to do as such, until it becomes what you’ve seen today.” [6]

It is compulsory to recite  (بسم الله)/Bismillaah upon slaughtering animal, and it is suggested to add  (والله أكبر)/ wallaahu akbar afterwards.

There are some narrations that explain about the prophet’s -peace and prayer of Allaah be upon him- dhikr upon slaughtering, among them are:

In the name of Allaah, Allaah is The Great, This is from Muhammad and his followers who worship Allaah alone, and testify that I have delievered it (Allaah’s words). [8]

Ruling of Mentioning the Name of People Who Offer Slaughtering

It is suggested to mention the name of the people who offer the slaughtering, if he or they appoint others to perform it on their behalf. It is narrated from ‘Ali Ibn Abi Thalib[9], Ibn ‘Abbas[10], Al-Hasan Al-Bashri[11] that they slaughtered their animals while reciting additional redaction “(اللَّهُمَّ تَقَبَّلْ مِنْ فُلاَنٍ)/O Allaah, please accept from so-and-so.” In the hadith that we’re discussing, there is a general conception that the Messenger of Allaah mention the slaughtering for himself and for others.

Ruling of Slaughtering for the Deceased

There are three kinds of slaughtering for the deceased:

Allaah knows best, the more correct opinion is the one stating that it is allowed to do so. This is th opinion of Sheikh al-Islam Ibn Taimiyya, also the scholars from the recent century, such as Sheikh Ibn Baaz and Sheikh Muhammad Ibn Shalih Al-‘Utsaimin.

Among the indications that support this opinion is the hadith that we’re currently discussing, as well as other hadith which indicate that the Messenger of Allaah -peace and prayer of Allaah be upon him- once tag names of the deceased along in his slaughtering. It is a general indication that supports the opinion stating that it is allowed to slaughter animals for the deceased (on their behalf, -tr). Slaughtering for the deceased is also a kind of giving alms for their sake. And giving alms for their sake is allowed, according the scholars.

However, anyone who slaughters animal on behalf of the deceased, should not take anything from the slaughtered animal, because he has intended to slaughter it as an alms.

“Some scholars give dispensation in regards to slaughtering for the deceased, and some said that it is not allowed to do so. ‘Abdullaah ibn Al-Mubarak said, ‘I prefer that he gives an alms, and not slaughtering. If he does so (for the deceased), he should not eat anything from it, and he has to donate all of that slaughtered animal.” [12]

What can we infer from the statement of Abdullah Ibn Al-Mubarak above is that it is allowed to slaughter for the deceased, however, it is not suggested to do so. And he prefers to give alms on behalf of the deceased, rather than replacing it with slaughtering. And Allaah knows best, this is the stronger opinion (of the two).

May this article benefit us all.

[1] Narrated by Ahmad in his Musnad, hadith no. 8273, Ad-Daruquthni in his Sunan, hadith no. 4762 and Al-Hakim in Al-Mustadrak, hadith no. 7565. Among the chain of narrators brought by Ahmad and Al-Hakim, there is Abdullah Ibn ‘Ayyasy, his status as narrator of hadith is shaduq yaghlath, according to Ibn Hajar in At-Taqrib; among the narrators of Ad-Daruquthni, there is one named ‘Amr Ibn Al-Hushain and Ibn ‘Ulatsah, both of them are matruk. These two line of narrations can’t strengthen one another, thus, apparently, the status of this hadith is weak. Sheikh Al-Albani said that this is a hasan hadith, in his book Takhrij Musykilail-Faqr no. 102. Whereas the imams, such as At-Tirmidhi, Ibn ‘Abdl-Barr, Al-Baihaqi and Ibn Hajar supported the notion that stated that this hadith is categorized as mauquf. (see: As-Sunan Al-Kubra lil-Baihaqi no. 19485, Bulughul maram).

[2] It means slaughtering on the beginning of month Rajab. Allaah knows best. Majority of scholars stated that it is not suggested to slaughter in the month of Rajab because there is a hadith that nullifies its ruling. For further explanation, please refer to books regarding detailed explanation about this hadith.

[6] Narrated by At-Tirmidzi no. 1505 and Ibn Maja no. 3147. Sheikh Al-Albani classified it as valid hadith in his book, Shahih Sunan At-Tirmidzi. 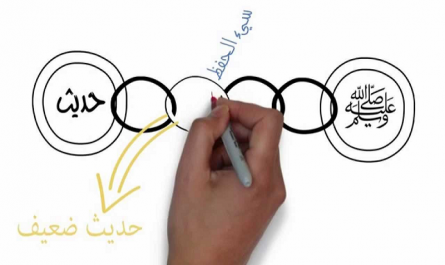 Ruling of Narrating A Fake Hadith